In August 2003 two police officers sat down and discussed forming a pipe and drum band stating that the band’s motto would be “To Honor the Fallen”. Since that night, the Newport News Police Pipes and Drums have grown to be a nationally recognized band.

The band has become a community based organization with members coming from all walks of life. There is active duty and retired police officers, firefighters, military, private citizens, and students. Members are to attend practice and commit to making performances when needed. The band does not charge for bagpipe and drum lessons. Members are awarded scholarships to attend schools taught by world champions of the craft.

In the early years members bought and paid for their uniforms and instruments. Fundraisers were held frequently to help offset the costs. Fundraisers included bake sales, yard sales and several Celtic infused ceilidhs (Gaelic for parties). Our first bass drummer, Steve Dailey, actually learned his craft on a cardboard box!

Every spring the band makes the pilgrimage to Washington, D.C., to participate in ceremonies honoring fallen heroes at the National Law Enforcement Officer Memorial located at Judiciary Square. The band is honored to participate in the Concerns of Police Survivors Candle Light Vigil. The band marches in the National Conference of Law Enforcement Emerald Society’s Memorial March and performs on the steps of the nation’s capitol during the Fraternal Order of Police Memorial Service. The President of the United States is often the keynote speaker. These three days in May are the largest expense for the band, costing approximately $10,000. 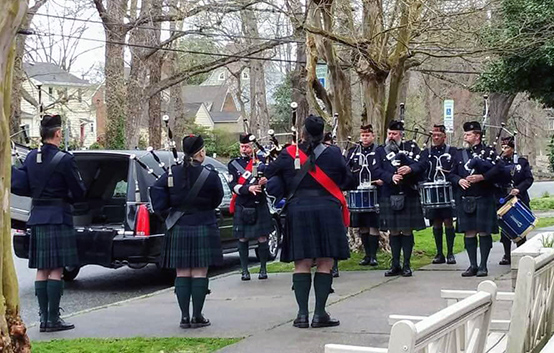 TO HONOR THE FALLEN